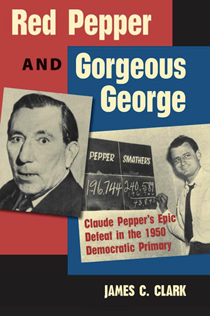 “A fascinating study of two important Floridians at a critical juncture in American history, when anticommunism made a decisive mark on postwar politics and culture. Clark effectively untangles the divergent strands in the complicated story of the Florida senatorial election of 1950, and he does so judiciously and fairly. Crisply written, engagingly presented, and carefully researched, this is essential reading for students of modern America.”

William Link, author of Righteous Warrior: Jesse Helms and the Rise of the Modern Conservatism

The campaign that changed everything in Florida

“In this important and insightful work, Clark does much to separate myth from reality in the pivotal 1950 Florida Senate race that shaped state and national politics for decades to come. Red Pepper and Gorgeous George captures the drama, controversy, and chicanery of one of America’s most memorable elections. A must-read for anyone interested in Florida and southern history.”

The 2000 presidential election introduced the phrase “hanging chad” to the national lexicon but for those in the know the Florida “election of the century” took place 50 years earlier.

Claude Pepper was first elected to the U.S. Senate in 1944. A Democrat, he had every reason to suspect the seat was his indefinitely. Certainly no Republican candidate could challenge him in general election. Pepper never counted on George Smathers.

Pepper saw himself as the national heir to Roosevelt’s foreign policy; he encouraged cooperation with the Soviet Union, our WWII ally, and actively worked to defeat Truman’s presidential nomination in 1948. However, the political world was changing, and it was Smathers, not Pepper, who recognized and took advantage of this fact. Although McCarthyism was later named after the junior senator from Wisconsin, it was Smathers who first—and successfully—used such divisive tactics in what became a vicious, bare-knuckled campaign.

Smathers’ resounding victory inspired others, including Richard Nixon and Barry Goldwater, to adopt similar tactics. It also helped set the stage for the complete reversal of the political power structure that had ruled the South for nearly a century.

James C. Clark, former editor of Orlando magazine, teaches history at the University of Central Florida. He is the author of four books, including Faded Glory: Presidents Out of Power.

A History Lover's Guide to Florida

Florida is a state of transplants. Even people who relocated here decades ago still claim their birthplace as their home. They might change their mind if they knew that the Sunshine State owns one of the richest histories in the nation. Decades before the Pilgrims, the Spanish celebrated Thanksgiving in Florida. Centuries before the first St. Patrick's Day Parade in New York, the holiday was celebrated in St. Augustine, where urban renewal was underway when Jamestown settlers arrived. Author James Clark offers a lifetime of places to explore and thousands of facts to fascinate, tracing the state's long history from Pensacola to the Florida Keys.

A Concise History of Florida

In 1513, Spanish explorer Ponce de León first set foot on Florida's east coast. The land he discovered was a geographic anomaly so distinctive that astronaut Neil Armstrong said Florida was the first shape on earth he recognized on his return from a visit to the moon 456 years later. This unique state witnessed momentous events from the 1959 arrival of the first Cuban exiles under Fidel Castro to the 1981 launch of the Columbia, the first space shuttle. Join author and historian James C. Clark as he chronicles the history of the Sunshine State in this concise and captivating history.

The Pineapple Anthology of Florida Writers, Vol 2
This is the second in a series of fiction and nonfiction by legendary writers who wrote in Florida, or about Florida. This volume covers five centuries of Florida writers from Cabeza de Vaca in the 1500s to James Patterson in 2014. Each selection is accompanied by an essay by Clark explaining the writer's place in Florida literature.
The Pineapple Anthology of Florida Writers, Vol. 1
This is the first in a series of collections of fiction and nonfiction about Florida by legendary writers who came here—some to escape the chilly North, some to find freedom, and some to investigate what the fuss was all about.
Orlando, Florida: A Brief History
Most Americans only think of theme parks when they think of Orlando. But the city has a rich history as a cattle center--complete with rustlers--the nation's citrus center, and finally the top tourist destination in the United States.
Presidents in Florida: How the Presidents Have Shaped Florida and How Florida Has Influenced the Presidents
U.S. Presidents have played a major role in shaping Florida, whether waging wars, protecting the environment, seeking votes, or just drawing media attention to the state's attractions.
Last Train South: The Flight of the Confederate Government from Richmond
The dramatic story of the Confederate government’s escape from Richmond at the end of the war.
Red Pepper and Gorgeous George
The campaign that changed everything in Florida.
200 Quick Looks at Florida History
Learn 200 quick, painless history lessons in one thoroughly researched book. An indispensable guide for Florida students, newcomers, and old-timers alike.
Faded Glory: Presidents Out of Power
The stories of the men who rose to the nation’s highest office, then gave up that power to return to lives which were often difficult.